November 15th marked Satu (1) Suro, the first day of the Javanese calendar, which also corresponds with the Islamic New Year. Which in turn set off a slew of festivities around my area: Grebeg Suro XIX. These celebrations went on for a week and usually started off in the sore or evening time. There were quite a bit of unique traditions displayed. As most cultures are, the Javanese can be superstitious, EXTREMELY superstitious, so most of the celebrations that took place have been practiced rituals for centuries. Reminder: Indonesians will never pass up the opportunity to celebrate.

Reog: As I’ve told stories in the past, I’m on the Reog wagon. I like musicals and theater and aside from the cheesy soap operas played on most Indonesian’s TransTV, Reog is kind of the closest thing I got to my preferred live entertainment here. There aren’t many lines, it’s mainly music, dance, and aerobatics. There are about 5 main characters, and the feature character is the prince who later transforms into a sekhmet with the head of a lion accompanied by peafowl feathers and body of a man—to signify that masculinity also needs the balance of femininity—and held by the performer’s teeth! The masks are between 20-40 kilos and the movement they do with the mask clenched between their teeth is quite impressive. The story “originates” (kind of a made up fairy to enhance the culture…) from the city of Ponorogo. A campur (mix) of fairytale/love story and rebellion of a kingdom. Currently 3 PCVs live in Ponorogo. I live 10 minutes outside, but not in the city so people aren’t as gun-ho about Reog in my town as they are there. After hearing stories about their experiences I can be happy to only live close by. The Ponorogo community grips on to this signature tradition tightly and seems like it would be a broken city if Reog was to ever fade out or be lost among future generations, therefore, they work pretty hard and invest a lot of money in order to keep this tradition alive. Every year, a week prior to Suro 1, Ponorogo holds a Reog competition for all of Indonesia. The MC called it the “most happening event of the year!” As if this were the Olympics or Wimbledon. I suppose for Indonesia, it was big because Reog groups not only traveled from West, Central, and East Java but also islands outside, including Kalimatan, Sulawesi, and Sumatra. It was Reog XIX! I went the last two days of the competition and got to go backstage (..!!!). I saw the performers get warmed up before the performance. The teachers who took me were most excited about inviting me to get a glimpse of the “behind the scenes” action perhaps because I had asked questions before about rituals like glass eating, trances, and “becoming the lion”…unfortunately I didn’t get that type of exposure of said rituals or that great of photos either, however, I did get to talk to a few of the dancers and treat someone else with special attention as if THEY were famous instead me being the famous one. The last day of the performance, I met up with a solid group of PCVs. We walked on the wild-side with a few carnival rides prior to the awards ceremony. There were a bunch of different performances from other islands and cultures, a bunch of unnecessary and long speeches and repeated Assalamu’alaikum, followed by the top awards. Jakarta, West Java took home 1st place in the Reog competition and gave an ending performance. Then unexpectly and after most people had left, a very abstract and modern show was performed by some local group that I’d like to get in with, it was quite spectacular. Followed by a decent fireworks show capped off the night, because Indonesians love setting things on fire. 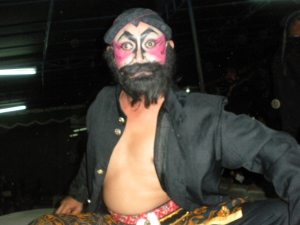 Wayang Kulit: I had never really had a great appreciation for Wayang until the other night. Wayang Kulit means shadow puppets and that’s exactly what it is, an Indonesian puppetshow. There are various puppets and most are symbols of Javanese history. The puppets are all handcrafted and made from buffalo skin. Traditionally shows begin at 10pm and last until 4am, which is to challenge the audience to stay up the whole night, and have time for self-reflection, accompanied by the puppetshow. This particular show took place in a nearby village so I had no problem getting there that late. There was certainly not enough sugary coffee on Java to keep my eyelids from drooping, so I didn’t make it past 1am. Unfortunately, a bedtime of 8pm has weakened my ability to pull all-nighters. Shame. There was a Gamelin group (musical instruments) of about ten men and 8 women singers, who worn suction cup tight kebayas, full hair and make-up, and sat in the most uncomfortable of positions for the entire 6 hour performance. What was probably most impressive was the lone puppeteer, who single-handedly performed each puppet’s role, while playing a little instrument of his own with his foot, WHILE keeping a lite cigarette at all times. Mans got skills. I couldn’t understand the dialogue because it was mostly in Bahasa Gawe and Jawa, however, I followed through the sounds of the music and actions of the puppets. People seated around me alternated with a few questions; was I ngantuk (sleepy), lapar (hungry), or dimengerti (understanding), and this went on about every 5 minutes or so. But perhaps what was most annoying was how they announced my American presence to the audience and said I would get up on stage later and sing. Frankly at that point I felt the right to be a little rude and turn down the offer because not only did it not make any sense, but also I was there to be appreciate their art. How would me singing Adele’s “Someone Like You” be appropriate? The people around me weren’t super pleased and kept asking me the rest of the night if I was feeling ill. It didn’t completely ruin it for me, and I now know for next time to go in disguise and with a full days rest. 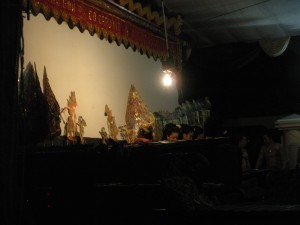 Larungan Buceng: This event closed the week long celebrates and start of the new year. They create this massive larungan buceng, which is a cone made of giant banana leaves usually and filled with rice. In my area, it took place at a lake called Telaga Ngebel—about 20 minutes from me. This is a lake that’s pretty quiet and cool, weather-wise, and my “get away” location, which I’d like it to stay that way when I’m there, so I decided against ikut-ing the recent celebration. Since most of my students live up there I was given a play by play. Basically, they gave the giant cone as an offering to the lake…some rituals are literal not just spiritual. Along with the mountain pile of rice, there was apparently a head from a sacrificed cow sent out afloat, but that’s just what I heard. People waited until the lake gulped them down and accepted the offerings or in other words until they sank. Nail biting I know.

Surprisingly (and fortunately), there was only one school holiday for the actual day of the New Year or Suro 1. The topics were nicely worked into lessons and discussions (most non-English) were lively. So what’s next? Ah, Thanksgiving…

This is not Peace Corps

The contents of this blog are my personal thoughts and observations. They do not reflect the position of the Peace Corps or the U.S. government